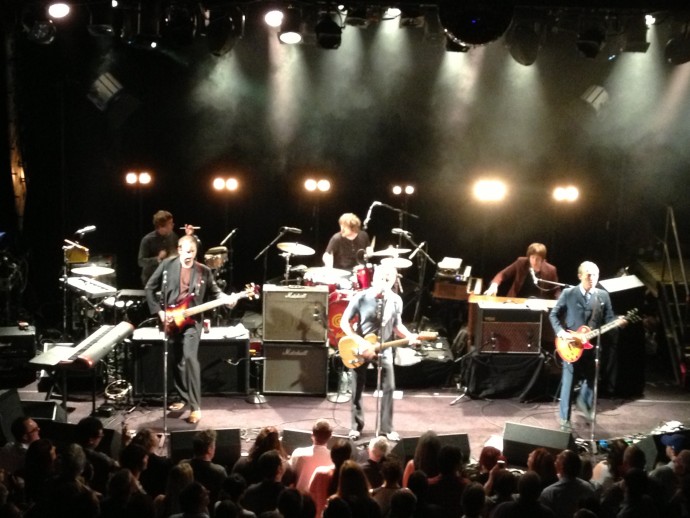 When Paul Weller rolls into town, I take notice. He’s probably the person I’ve seen perform live more than any other artist – I can honestly say that I’ve lost count. So, while I never had the pleasure of seeing either The Jam (in fairness, I was seven years-old when they split – so I hope you’ll let me off) or The Style Council, I have seen Weller through many incarnations of his solo years. From The Brixton Academy, to Trentham Gardens in Stoke, to the Town Hall in New York City, to Finsbury Park and the legendary Apollo Theatre in Harlem – I’ve seen acoustic shows, record-store appearances and festival gigs. But, I can say with absolute honesty that I have never been so excited to attend a Weller gig as I was last night. Two reasons…

First up, I give you this: Weller is on fire. Last summer I saw two shows, one in New York, and one as the headliner for the final night of Latitude in the UK. Both were truly stunning. Weller on top of his game is something to drink up – you’re witnessing something special. Last year, he tore through career-spanning sets (though, The Style Council years were notably absent), and absolutely nailed the reason for his ongoing relevance. Knowing that he was returning with the same band, there was no way that I’d be electing to miss Weller coming to my town.

And, secondly – truly underpinning my excitement: Weller was due to play at the Music Hall of Williamsburg. Now, this may not mean much to readers who don’t live in New York – but this venue is special. Tiny to the point that ‘intimate’ would become ’embarrassing’ if the show wasn’t top class, and with a layout that makes it almost impossible to have anything but an amazing view – it’s a luxury to be able to see an artist of Weller’s stature in such surroundings.

And, by Christ, he didn’t disappoint.

Effortlessly cool, with a 35-year catalogue of A-list material, surrounded by musicians at the absolute peak of their trade (has anyone lasted by Weller’s side longer than guitar wizard Steve Craddock?), and with a swagger that shows that he still means it – last night, Weller brought something truly special to a corner of Brooklyn. The set took in early solo material (‘Sunflower’ and a mesmerizing take on ‘Above The Clouds’), more recent output (‘Wake Up The Nation’ and ‘Be Happy Children’ both sounding special) and The Jam classics (if Weller got up on stage and just played ‘That’s Entertainment’ 20 times, the crowd would have left happy). But, for me, the standout track of the night came from The Style Council catalogue: ‘My Ever Changing Moods’ was a thing to behold. There was an air of astonishment, and unbridled joy from the audience at hearing a slice of classic pop given a jolt. It was like 80s pop on guitar-fuelled steroids. Lovely.

I’ve said before that Weller takes some beating when he’s on form. Last night, a 55-year old bloke from Woking owned Brooklyn.

2 replies on “Weller in Brooklyn”

I was there at the Music Hall of Williamsburg! And it was my first time seeing him live — oh my! (Standing about six rows back right in front of him…) After decades of counting myself among the Weller devotees (I, too, never saw the Jam or Style Council live…) I was stunned. I thought it would be a good show — but it was one of the best shows I’ve seen anywhere, ever, by anyone. Holy smokes! “That show changed my life” just may be true here. Thanks for the great review.

[…] with little by way of local expectation, we had another which was the talk of the town for weeks.Two Saturdays ago, Paul Weller – someone who’s name barely gains a hint of recognition from most people in the US […]