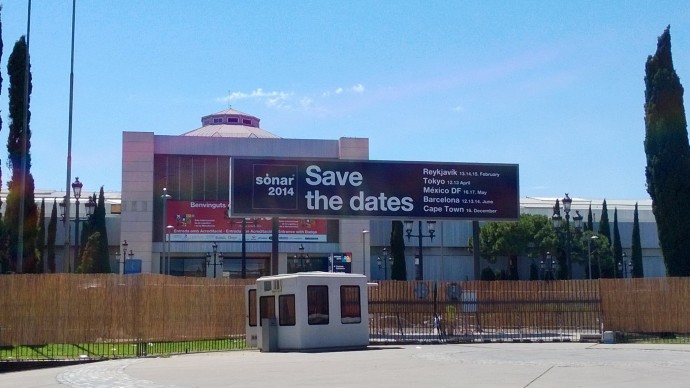 Held in central Barcelona every June and officially referred to as the ‘International Festival of Advanced Music and New Media Art’, Sónar is no ordinary music festival. Featuring some of the best established and up & coming electronic music artists in the world you can’t fail to be impressed by what you see and hear. Each year the organisers pride themselves on showcasing emerging talent through the Red Bull Music Academy alongside some of the founders of the genre including Kraftwerk, New Order and The Human League as well as huge names like The Chemical Brothers, Orbital and Beastie Boys.

I started going to Sonar in 2005 and it’s grown quite a lot since then so much so that this year it moved to its first change of location in 20 years. Originally centred around the Modern Art museum (MACBA) and Contemporary Culture Centre (CCCB) in the heart of the city the space had become too restrictive and so it moved to a new home a mile away that has increased the capacity and offered more flexibility yet it’s still compact and easy to get around so you can see anything you want. Maybe I’m clinging to the past or probably I’m grumbling like the Northerner I am and it’ll just take a bit of getting used to, but it wasn’t the same. It had lost something. It had lost my idea of what Sónar was. At the end of the day I was in Barcelona, I was sat in the sun having a beer listening to incredible music and I didn’t have a care in the world. Why shouldn’t I be happy?

From 12.00 until 10.00pm on Thursday to Sunday you get the daytime programme and then after that the night events pick up in a different location a few miles away and then it runs on until it finishes some time in the early morning, about 7.00am on Friday & Saturday. Even though you might not have heard of a lot of the artists, that’s the beauty of Sonar, you get to see loads of new stuff. Thursday kicked off sitting in a deck chair with Tutu, Fantastic Mr. Fox and Gold Panda playing on the main stage moving from house and garage through dubstep to electronica, a great start to the weekend.

Trying to pace myself for the coming days I had an earlyish night ready to take on the next two long days and late nights. Being in the centre of Barcelona and having to stay in hotels gives you the chance to get up and get out in the morning to do a bit of exploring and enjoy the city rather than being stuck in a field somewhere so I headed down to the port, had an ice-cream and a wander around before heading back to the festival. Over the coming day sessions we saw everything from Austrian techno played on drums, guitar & bass by Elektro Guzzi to the finest beat boxer the world has probably ever seen in Beardyman and one of my favourite DJ sets from the one and only Mary Anne Hobbs of BBC 6 Music.

The night sessions are a different beast entirely. Moving further out of town to an exhibition centre it has a huge capacity, three stages (two outdoors) and a totally different feel. With the likes of Kraftwerk, Bat For Lashes, Two Door Cinema Club, Derrick May and techno legend Richie Hawtin to name a fraction of the Friday line-up you get a real mix of music to choose from. Saturday saw Pet Shop Boys, Jurassic 5, Hot Natured, Justice & Laurent Garnier all play. With more of a club style, albeit on a huge scale, and more people than you’ve probably ever seen in one room the night sessions can at times be a bit oppressive but there’s so much to choose from you can always find some space. For me one of the highlights was British DJ and producer Melé who played a set full of party anthems spanning the decades which was pretty bold for a teenager who was on in between Pet Shop Boys and 2manydjs.

A lot of people go on until the sun comes up but I can’t handle it any more so whilst I might miss out on some good stuff I get some sleep. It’s a long weekend, it’s tiring and it takes a few days to recover from but is Sónar the best festival in the world? Maybe, just maybe. I haven’t found anything better.