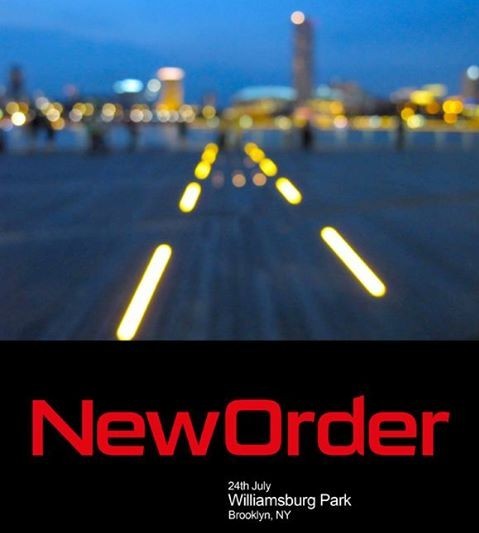 Walk down any street in Williamsburg, and your odds of passing somebody wearing a Joy Division T-shirt are pretty high. Admittedly, I’ve done my time in helping this cause – but it does sometimes feel that Joy Division are the unofficial mascots for Williamsburg.

I frequently make the point that New York and Manchester have a lot in common. Having lived in both cities, I do feel somewhat qualified to make this claim – a claim which almost always receives hoots of derision whenever I share it. But, architecturally, culturally, socially – there’s a huge amount in common. I even feel that Williamsburg itself, with disused warehouses and new apartment buildings being erected amongst the remnants of industry shares much with Castlefield.

Given this shared DNA, it’s perhaps fitting that Joy Division are so celebrated here. Especially given that the band which Joy Division were to become had so much of this shared Manchester / New York DNA filtered through their core. New Order changed the rule books. They took the quintessentially Mancunian – the sparse bleakness of Joy Division – and wrapped it in a New York club sheen. And in doing so, they created what should be an anthem for Williamsburg: ‘Blue Monday’. Honestly, it should be piped through the speakers at the Bedford L stop. Nobody would complain.

And so, where one British heavyweight hit the ‘hood a couple of weeks ago with little by way of local expectation, we had another which was the talk of the town for weeks.Two Saturdays ago, Paul Weller – someone who’s name barely gains a hint of recognition from most people in the US – played Williamsburg. A few nights earlier, New Order hit town. People had been talking about this one since the show was announced. It felt like a homecoming.

I need to get this out of the way upfront. It’s not quite New Order. It’s three quarters of New Order. But – the more I think about this, the more I hold firm to the opinion – Peter Hook wasn’t missed. I know that this is heresy to many – but at the end of the day, he’s just a bloke with a distinctive bass style (‘below the bollock line’). Tom Chapman, from Bernard Sumner’s side project Bad Lieutenant, steps in and fills the Hooky-shaped hole, minus the BS. Peter Hook can continue to mine the history of Joy Division, New Order and The Hacienda all that he wants to – but for me, the remnants of New Order is the only show in town.

The set at Williamsburg Park was remarkably similar to that which was put together the last time that New Order passed through NYC, at Roseland in 2012. I say similar, I am struggling to think of a single change in either the content or the order of the tracks selected. Opening with a brief rendition of ‘Elegia’ from ‘Low-Life’ (how I’d love it if it was the full 17:30 epic), and then taking in highlights including ‘True Faith’, stand-out track of the night ‘Perfect Kiss’, ‘Bizarre Love Triangle’, crowd-pleasing ‘Blue Monday’, ‘Your Silent Face’, and a mesmerizing ‘5-8-6’ – New Order is blessed with an embarrassment of riches when it comes to choosing their set. So, while it feels churlish to complain about a set that hasn’t evolved in the last few months, I do wish that some other tracks were given an outing.

To be absolutely clear, I left the gig thrilled at what I’d just witnessed. Part of the reason – New Order’s heritage was fully celebrated. From Joy Division classic ‘Isolation’ (tucked early into the set) through to the encore 1-2 punch of ‘Atmosphere’ and ‘Love Will Tear Us Apart’, it’s just so special to hear these songs live. And, with the image of Ian Curtis looming large behind the band, a lost talent was duly honoured. ‘Atmosphere’ (not the Russ Abbot song) gets me at the best of times. While watching ‘Control’, even though I knew what horrors were lying in wait, as the first bars started to play out, I was a wreck. As an evocation of loneliness and despair, it’s hard to think of a paradoxically more uplifting tune. I raised a glass to thank Ian Curtis as the tune was played – a sincere thanks. As I did so, Williamsburg collectively saluted him.