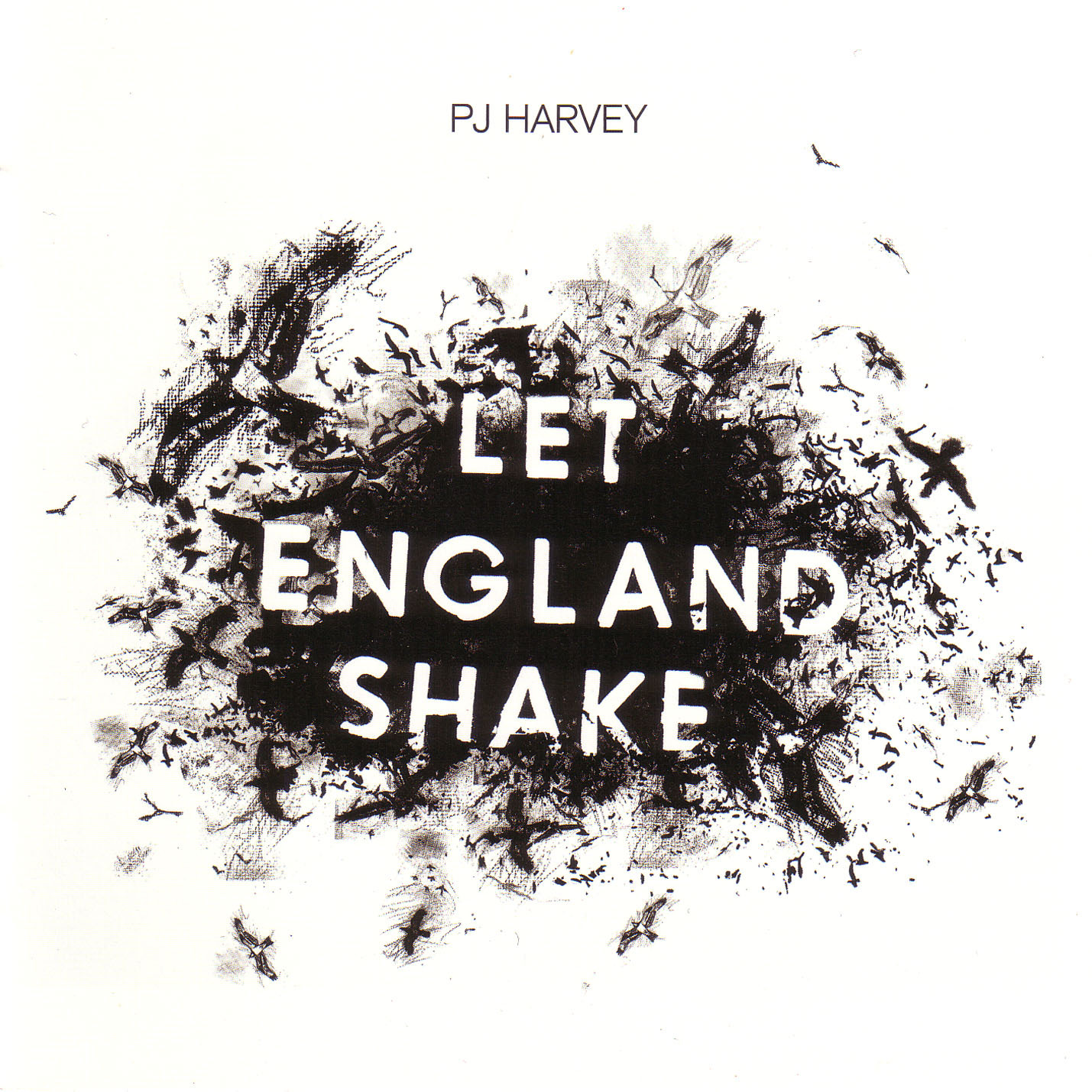 The perils of writing a ‘best albums of the year’ list are many. First of all, I know that I’ll be missing some albums which probably deserve to make the cut. Last year, for example, while calling out I Am Kloot’s ‘Sky At Night’ as the album of the year (which I still stand resolutely by), I criminally overlooked output from Foals and Janelle Monáe in my end of year list. Still, rules is rules, and I’m working with what I’ve got for now. If I was to come back in a month’s time, this list may well change.

Secondly, ten is a tough number to come down on. There are tons of solid albums that just don’t make the cut. So, Bjork, Friendly Fires, Joan As Police Woman and Noel Gallagher all fail to make the cut this year.

Finally, there’s the disappointment of albums which you really wanted to live up to expectation, and just fail to deliver. Step forward, Florence.

PJ Harvey – ‘Let England Shake’
So – diving into my top ten for 2011, let’s just cut to the chase. This has been a year of fine music. But, I think it’s fair to say that one album absolutely dominates. It would be borderline perverse to call out a ‘best of’ list, and select any other album as the highpoint for 2011. In amongst a bumper crop of releases, this year we were treated to what is already a classic album. Immediately hailed as a masterpiece – and rightly scooping the Mercury Music Prize, this year has to belong to PJ Harvey for ‘Let England Shake’. It’s a towering achievement. It’s like a punch to the stomach every time I hear it. The album delivers on every conceivable level. So much has already been said of this album, it’s probably time to move on – just to acknowledge the brilliance of every twist, and every turn, and to state as fact that ‘Let England Shake’ is an album which we’ll all be listening to for years to come. And, that it’ll always sound magnificent. That, and it contains the lyric ‘God damn Europeans, take me back to beautiful England’. Marvellous.

The balance of my top ten is a true freethinking list – it’s a clash of genres. Some is absolutely predictable to regular freethinking visitors, some probably not. So, in no particular order, here are ‘the other nine’ of my top 10 for 2011…

Beastie Boys – ‘Hot Sauce Committee, Part Two’
More retro than Gary Coleman completing a Rubix cube while wearing a set of Air Jordans – somehow The Beastie Boys managed to sound as fresh as they ever have in 2011. What comes across at first as the sound of grown men dicking about in a recording studio is in fact an object lesson in whip smart sampling, tight grooves, and piss-funny rhyming. Seriously, what’s not to love about the Beastie Boys?

Radiohead – ‘The King of Limbs’
While I’ll happily admit to being a bit blind when it comes to Radiohead (they could probably have made this list with a set of Nana Mouskouri covers), I’ll stand up for TKOL as long as night follows day. ‘Lotus Flower’ sounds like Radiohead having fun – yes, fun. ‘Codex’ takes the melancholy of ‘How To Disappear Completely’ and ‘All I Need’ and ups the ante even further. It’s an album which satisfies on every listen. You can’t ask for more from The Best Band on The Planet.

TV on the Radio – ‘Nine Types of Light’
A serious contender for the number one slot – ‘Nine Types of Light’ is a truly astonishing album. ‘Will Do’ and ‘Second Song’ are two of the strongest tunes of the year. Any album containing both of them has to be on to something. Blurring the boundaries between rock and funk – but in a far more sophisticated manner than Red Hot Chilli Peppers could ever even imagine – TV on The Radio sounded like a band on a mission.

Seun Kuti and Egypt 80 – ‘From Africa With Fury’
Fela’s dead, long live Fela! Seun Kuti, ably assisted on production detail by Brian Eno, has knocked out an album of afro beat deserving of the Fury in the title. It’s angry, it’s politicised, and it’s funky as hell. Staying still to this is not an option.

Jez Kerr – ‘Numb Mouth Eat Waste’
Jez Kerr has been evolving his sound for the last 30 years as a member of Manchester legends A Certain Ratio. His debut solo album acts as a continuation in this aural evolution – taking in the dirge of early ACR, and more contemporary electronica. The journey takes in Ralph Myerz, northern gallows humour, and Kraftwerk influences. There won’t be many ‘best of’ lists calling out Jez Kerr’s debut solo album, and there’s one reason: people just don’t know about it. Lead singles ‘Rip You Right Back’ and ‘Play Sumthing Fast’ should be Mancunian classics by now. The introspection of ‘Reason I Feel Like An Alien’ (earlier recorded under the moniker Twenty Four Hours) is as accomplished piece of songwriting as you’ll hear. Hopefully, off the back of a solid Guardian review earlier in December, this could change, and one of the albums of 2011 will find a solid audience in 2012.

Charles Bradley – ‘No Time For Dreaming’
Picking up the mantle from Lee Fields for 2011, Charles Bradley showed us that having been around the block a few times was no bad thing. Backed by the same group of guys behind the El Michels Affair, The Menahan Street Band and, essentially, Lee Fields’ Expressions – this is as much an album belonging to the Dunham Records, Truth & Soul and Daptone scene as it is to Charles Bradley himself. Dripping with soul, and knee-deep in a life lived at the tough end – it delivers for the head, the heart and the feet.

Anna Calvi – ‘Anna Calvi’
Going right back to January, Anna Calvi’s debut album is a statement of intent. From the slow burn of the opening track ‘Rider To The Sea’, through to the guttural ‘Suzanne and I’, Anna Calvi nailed it to the wall. Live, she’s a force of nature. On record, the ferocity may be tamed, but it’s still devastating.

Kate Bush – ‘50 Words For Snow’
Yes, an album with guest vocal duties from Elton John has made the cut. Subtle, understated, and haunting – this is Kate Bush knocking the ball out of the park without even breaking sweat. In a year where the opulence of Florence + The Machine was celebrated for their ‘Ceremonials’ release, it seems fitting that Kate Bush (AKA Florence Mark 1) could show the heavy drinking upstart how to actually do it. With style, grace, and flourish. Given the choice between the bombast of ‘Ceremonials’ or the lightness of touch of ’50 Words For Snow’, I’ll take the latter any day. Even if Elton’s on it.

Elbow – ‘Build a Rocket Boys!’
While Elbow’s new material didn’t reach the heights of ‘The Seldom Seen Kid’, it was still wondrous. It’s an album about family, childhood, optimism, home. Not exactly the most rock ‘n’ roll topics, but by Christ it works. ‘Lippy Kids’ provided the pulsating heart of 2011 – an anthemic celebration of childhood, shot through with northern charm.

There you have it; the freethinking guide to the ten best albums from the last twelve months. Next year we have more from I Am Kloot, incoming material from Lee Fields, and a follow up to the Merury Prize winning debut from The xx. Oh, and a little something where Paul Weller promises to be ‘groundbreaking’: ‘Sonik Kicks’. Sign me up.

Jez Kerr – Superb. Human not a haircut, acknowledged at last . .

Great read and a lot of stuff for me to check out. It’s funny as I know very well of PJ Harvey and amazingly have never heard even one of her songs. I think I’ve been missing out. Will finally be introducing myself to her music based on you rec and that great performance in the vid above. One listen and that’s all it took. The power of music!

[…] a burden around with me for the last few months. It was prompted (and partially prologued) in my ‘Top 10 of 2011’ post, where ‘Ceremonials’ was resolutely not included. ‘50 Words for Snow’ was, however, […]