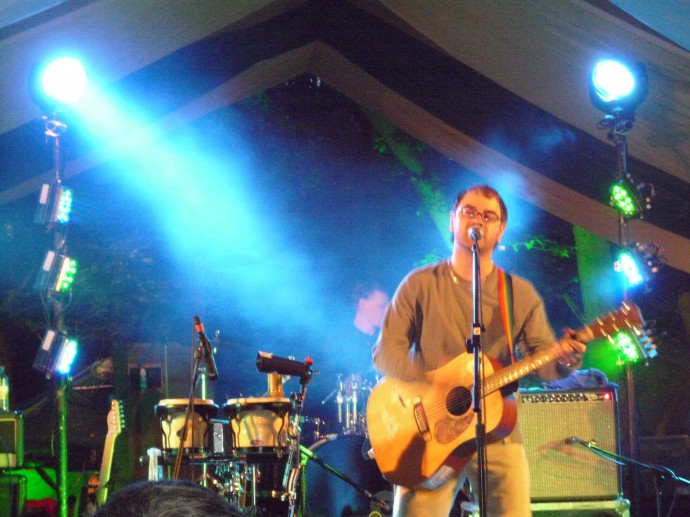 Let’s get the headliners out of the way.

Paolo Nutini: I couldn’t tell you, as I wouldn’t have been seen dead near to any stage with him on it.

Suede: totally bobbins. I never liked them, and it turns out that the 20 year old me was right.

So – it’s not a great starting point for a post covering Latitude. But, despite the pissing rain, and the sudden overload of hormonal teenagers taking over the normally sedate festival, Latitude was good fun.

Going into the festival, my sights were set on Foster The People as a likely highlight. Cramming the band onto one of the smaller stages (a move that frankly made no sense to me) at least afforded a more intimate experience than seeing them in the main arena. By Christ, they were good. About 45 minutes of pure pop, but delivered with such exuberance, such enthusiasm that you couldn’t help but just grin. ‘Pumped Up Kicks’ drew the biggest cheer, but I swear that the crowd just lapped up the whole set – they could have covered a Backstreet Boys song to close and got away with it. We’ll be seeing more of Foster The People.

I also had high expectations from Everything Everything (who were spot on, despite uttering the dangerous words for a festival: ‘now we’re going to play you a new song’), from I Am Kloot (a festival highlight for me) and from Caribou (pretty much singlehandedly making the Friday lineup work). Anna Calvi was also high on my list – I’ll come back to her in my next post…

Part of what I like about the whole festival experience is when a band sneaks up on you, and blows you away. Probably the biggest surprise for me this year came from Kele – him out of Bloc Party. Despite frankly shitty weather, and a mid-afternoon slot on the main stage which really didn’t suit, he totally nailed it. A couple of re-worked Bloc Party tunes (probably to keep the festival mainstream happy), and a set of ridiculously accessible dance music later – Kele had a waterproofed throng bang up for it.

Closing out the Saturday night (while Paolo Nutini was getting middle aged women into a frenzy on the main stage) was a great combination of Steve Mason followed by Foals. Steve Mason’s ‘Boys Outside’ was one of the best albums of 2010 – and I’ve been gutted by the lack of New York shows on his schedule. His set really conveyed the range of ‘Boys Outside’, from percussion-led tunes which betray his Beta Band roots, through to the more solemn title track. Festivals tend to keep the sets from all but the main headliners short – so this was in-and-out, completely efficient, with nothing to spare. Moving from that to Foals, I figured that any band would struggle to capture my attention. I caught Foals at Latitude a few years back, so was totally thrown by how bloody good they have become. It was like witnessing a complete re-invention – their presence was massive.

For the Saturday alone, with Kele, Steve Mason and Foals – Latitude would have been a success.

But, for the upsides on Saturday, there was one huge disappointment. I thought that giving James Blake a slot at the very end of the Sunday night, on one of the smaller outdoor stages, was a blinding way to close out the festival. It turns out that it was a complete disaster. I couldn’t tell you if he was any good or not. And so, I come back to one of my opening comments about a mass of hormonal teenagers. The crowd for James Blake’s set was a moronic horde of pubescent tosspots. They wouldn’t shut up. They wouldn’t stand still. I actually found myself complaining about ‘the youth of today’. Seriously – I uttered those very words. You really don’t need a bunch of knobheads shouting and throwing indecipherable hand gestures as some fairly intense ambient soul is being worked through on stage. Tools. They totally ruined what could have been brilliant.

And so – while Latitude normally has a reputation as ‘the middle class festival’, I sincerely hope that 2011 wasn’t a sign of it becoming the ‘posh kids getting away for a safe weekend’ festival. I could really do without that. For 2012, we could just do with some decent headliners, and national service.

Honestly, James; if the post-A Level throng irked you this year, you’d have hated the masses who were drawn in by Florence, Mumford and Vampire Weekend in 2010.

This year’s Latitude was last chance saloon for that reason, but it did enough to draw me back in twelve months.

I think that Vampire Weekend would have irked me plenty.

Next year, maybe they should go the whole hog, and try to cater to the new demographic: The Wiggles to headline on Friday.

Seriously, I’ll still be back*. And, next year we should actually meet for a beer.

*unless they do go for The Wiggles. I draw a line.