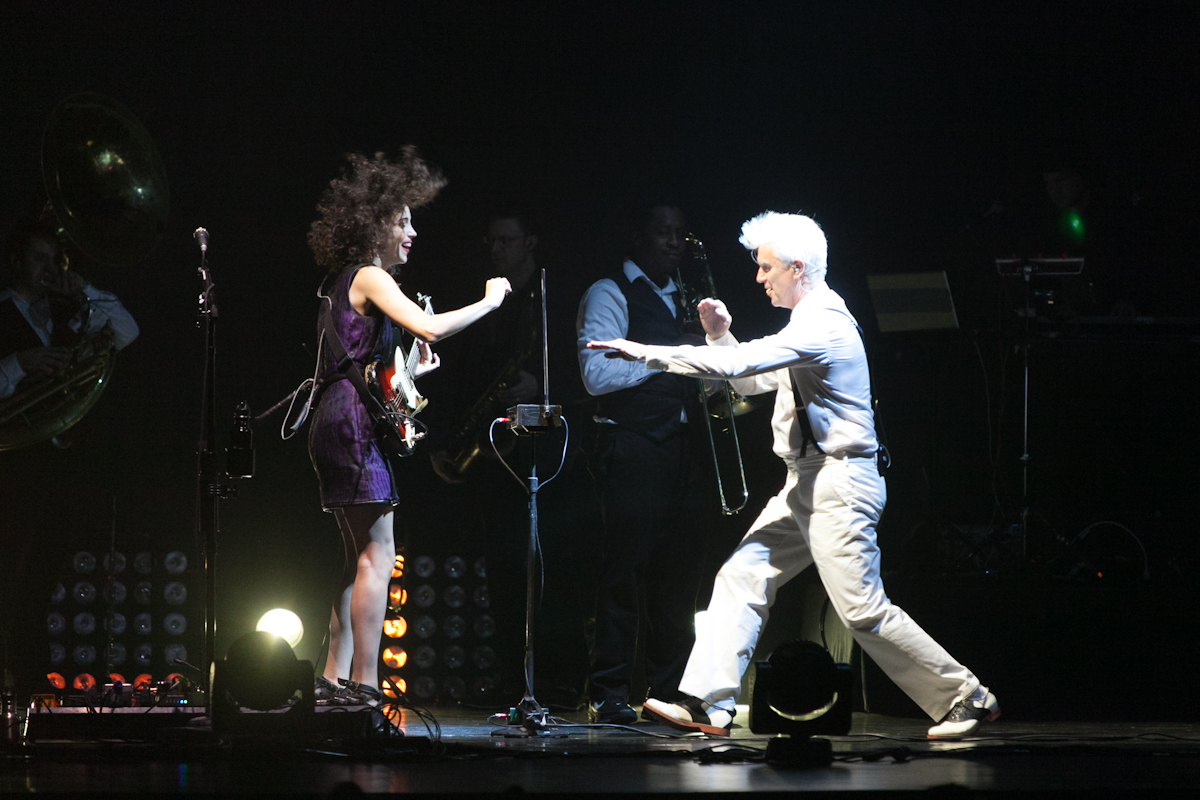 Let’s get this out of the way: the best music from 2012 came not from new blood, but from established artists. Fine, there are some exceptions, but as a general rule, last year some comparatively old dogs absolutely nailed it.

*braces self for onslaught of not-so-constructive feedback*

As ever, picking ten albums is really tough. There are some albums which almost deserve to make the cut based on one track alone. Tindersticks (for ‘Chocolate’, an instant twisted classic), The Invisible (for ‘Generational’, a bass-bin terrorising thing of beauty), The 2 Bears (for ‘Bear Hug’, with lyrics that eschewed any pretention to the high brow, but which still managed to be as infectious as the norovirus), Public Service Broadcasting (for ‘London Can Take It’, which just sounds about as important as music gets). And then, there are albums which I’m taking the hard decision to leave out – but which will appear on most other lists: step forward Alt-J.

At this point every year, I also share a caveat. I share that this is an imperfect list, as I acknowledge that I’ll be missing some amazing music. I share that this is a list that’s right for this point in time, but that it may change if I were to re-do it in a few months, really reflecting more on the output from 2012. But, here’s the thing: when I look back over previous lists, I’m actually pretty happy about them. There may be a few changes I’d make, but I do pretty much stand by my selections. So, balls to it: I’m diving in with no safety net. This is my list. I’ve thought about it enough, so I’m sticking with it…

David Byrne & St. Vincent – ‘Love This Giant’
A horn-driven collaboration of deeply funky cuts, interspersed with quirky randomness, from the lead singer of Talking Heads and one of the cast of thousands from The Polyphonic Spree? Seriously, what’s not to love about this album? It captured David Byrne at the peak of his remarkably creative game, and threw in some leftfield guitar wizardry from St. Vincent. Truly astonishing in scope and intent – this delivered on all fronts. Album opener ‘Who’ captures David Byrne on his A-game – something that many albums since the demise of Talking Heads have managed to do. But, the change here is that this momentum is carried through an entire set – the frantic pace given careful moments of pause (such as ‘I Should Watch TV’), allowing you a chance to breathe and reflect over the horn-driven majesty you’re witnessing. It’s just a wonderful thing.

The balance of my list is, as ever, presented in no particular order. I return to my opening gambit, that 2012 was a year for established artists knocking out some truly solid material. I’ll call this out now: there’s only one new artist below. It feels odd, but I’m calling it as I see it…

Beth Orton – ‘Sugaring Season’
I’d simply assumed that Beth Orton’s best was behind her. While ‘Daybreaker’ and ‘Comfort of Strangers’ had their highlights, there’s been nothing to match the consistency of ‘Central Reservation’… until now. In ‘Sugaring Season’, Beth Orton manages to stay true to her sound – folk, with the influence of electronica close enough that you can sense it, if not hear it, while somehow bringing it more up-to-date. This is up there with her mid-90s peak.

Lee Fields – ‘Faithful Man’
Proof positive that ‘My World’ was no fluke. Powered by the ludicrously tight Truth & Soul outfit, this could be seen as more of the same – a continuation of Lee fields and Charles Bradley’s renaissance. But, this is a far more grown up album than ‘My World’. It’s a serious album, from a serious soul heavyweight. This is Lee Fields making his claim on being the keeper of the flame for real soul. When Lee Fields cries ‘I Still Got It’, he means it.

Richard Hawley – ‘Standing At The Sky’s Edge’
This came oh-so-close to heading my list this year. It’s just about as solid an album as you’d expect from Richard Hawley. National Treasure status it seems has started to be conferred upon him, and based on this collection, a seat at the top table is deserved. In ‘Seek It’, Hawley penned one of the most lyrically off-kilter love songs you’ll hear – and it’s all the more beautiful for it. There may be moments of Wellerness in here (notably the riff-sharing ‘Down In The Woods’, baring an uncanny resemblance to ‘Echoes Round The Sun’ from Weller’s ’22 Dreams’) – but the album still packs an unmistakable Hawley punch. Simply marvellous.

Martin Rossiter – ‘The Defenestration Of St Martin’
Or, where him out of Gene gets busy with a piano, and crafts an album’s worth of exquisitely tasteful tunes. Honestly, this is a massively late entry into my list – knocking out an album which I thought was a total given for the list from the moment I heard it. But, I’m going to stand by this. Over ten songs, the central conceit of a voice and a piano never tires or fails to keep you completely captivated (even with a ten-minute opener)… all the way to the point where the guitars are cracked out for the final bars of the final tune. Mesmerising stuff – and a timely reminder that Gene were a much-underrated band.

Bat For Lashes – ‘The Haunted Man’
Is ‘Laura’ the best song of the year? I dare you to find a better one. OK, maybe Blur had a shout at this, but there’s no denying that ‘Laura’ is a peach. Or that it’s from an album packed with anything-Florence-can-do-I-can-do-not-just-better-but-loads-better brilliance. I had absolutely written Natasha Khan off with ‘Two Suns’ (or, more accurately, a stale live performance on the tour accompanying the album). But, she’s not just back, she’s back and nailing what she does best. Perfect pop songs, with an undeniable edge. More, please.

Bobby Womack – ‘The Bravest Man In The Universe’
Going back a couple of years, I picked out Gil Scott-Heron’s ‘I’m New Here’ in the 2010 list. Bobby Womack’s 2012 release will bear obvious veteran-releasing-contemporary-electronic-soul-album comparisons. But, shhh when you say this: Bobby Womack’s album is better than Gil Scott-Heron’s. This is thanks in no small part to Damon Albarn (who, we should all probably hate for being a bit of a musical know-it-all – exactly who did he do a deal with in order to manage to turn his hand to so many things… and get them right?), ‘The Bravest Man In The Universe’ captured one of the musical reinventions of the year. The second best musical reinvention? Read on…

Neneh Cherry & The Thing – ‘The Cherry Thing’
Now this one came as a surprise. We’ve had rap crossover albums before. Guru’s ‘Jazzmatazz’ was at the core a hip-hop album with an undercurrent of classic jazz/funk. When the Brand New Heavies turned their hand to hip-hop, it still played as funk. And, even more up to date, the Black Keys managed an album which was the sum of its parts – rootsy blues, with rap royalty. Neneh Cherry, however, has broken the mould. This is a jazz album from a hip-hop artist. Moreover, it’s a far out jazz album from a hip-hop artist. It’s not an easy listen at first, but by Christ, it pays to persist.

Janice Graham Band – ‘It’s Not Me’
And here we have it. The only new band to make my list for 2012 is The Janice Graham Band. You almost feel like you’re encroaching on a bunch of mates, having a laugh down the pub. ‘It’s Not Me’ has the conversational tone of the Arctic Monkeys on top of their game – and the whole album has the sound of new music you wished that The Specials were recording.

Gaz Coombs – ‘Here Come The Bombs’
I breathed a sigh of relief when this came out. I jumped for joy when it was so good. Supergrass were purveyors of fine pop, who sadly ran out of steam. The Hotrats showed that they still had it when there was a good idea. Here, Gaz Coombs shows that he’s not running out of good ideas anytime soon.

And there we have it. You may well disagree, and that’s your prerogative, but this is my list, and I’m sticking to it. All in all, 2012 wasn’t a bad year. As we look ahead to 2013, there is already much to be excited about. We’ve got new music from Delphic, I Am Kloot, Charles Bradley, Everything Everything and from Atoms for Peace. We’ve got Jose James’ ‘No Beginning No End’ finally set to see the light of day. I’m also keeping my fingers crossed for The Family Bizarre – the band that has grown out of Jez Kerr’s solo side project from A Certain Ratio (and if lead track from the band, ‘Freeka’, is anything to go by, you should also be very excited to hear what they have to say). There’s also been a lot of talk in the news about new material from the lead singer of Tin Machine. A golden year, indeed…

[…] my usual caveats, lets get to the list. As ever, I’m starting with the best, and then giving you ‘my other […]