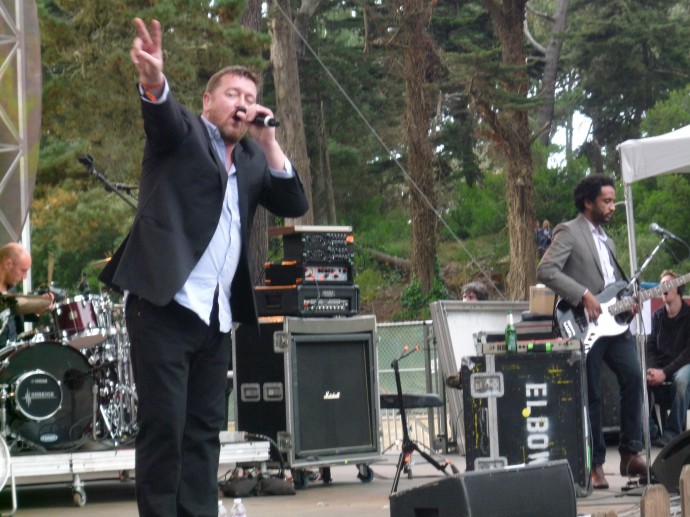 Even the most casual reader of these pages will know that I’m a bit of an Elbow fan. I feel that I need to put that out there straight from the off, so you know what you’re dealing with, here. That said, I’ve largely held back on commentary around ‘Build A Rocket Boys!’, save for a brief post, likening it to Peter Gabriel output – no bad thing in my books. But now, after a few months worth of album play, and three (very different) gigs, it’s probably a good time to pass comment.

So, let me rewind to March this year…

Elbow play the MEN Arena. This was a major homecoming concert to signal the release of new material. The last time they’d played the same venue was a stunning show. It marked the closing of the book on the album that had ostensibly brought the band to mainstream attention; the majestic ‘Seldom Seen Kid’. In 2009, they blew the MEN apart, with a typically intimate set – somehow managing to make a cavernous venue appear like the back room of a pub (namely The Britons Protection, for those in the know…). As ever, Guy Garvey charmed the socks off the audience – only with the added pleasure that the band were riding high on the crest of a Mercury-winning wave, and they wanted to share their success. In 2009, Elbow owned The MEN Arena. It seemed a fitting venue for the local heroes to return to in order to usher in ‘Build A Rocket Boys!’…

Now, you can probably tell that I’d set the bar fairly high, here. At the end of a couple of years of almost constant touring ‘Seldom Seen Kid’, on their previous MEN outing, Elbow simply couldn’t fail. Whereas, jumping up on stage to play a new album in March 2011, with only a handful of live performances for the new material under their belt, the easy charm which they’d displayed for ‘Seldom Seen Kid’ wasn’t quite there for ‘Build A Rocket Boys!’. Now, let me be clear: I am not saying that it was a bad gig. Far from it. I’m saying that what makes an Elbow concert special was somehow missing when they rode into the MEN Arena earlier this year. Elbow themselves didn’t have the ‘easy charm’. They knocked the ball out of the park, with a crowd-pleasing set, including songs which would be guaranteed to get a stadium full of Mancs singing (step forward, ‘Station Approach’), and an audience in rapt expectation. They could barely put a foot wrong. Unless, that is, you knew what to expect from an Elbow concert. The MEN felt less like the back room of a pub, and more like a massive energy-sapping chamber.

Fast forward to September, and we’re in New York City. Swap one venue which had conspired against Elbow for another space which holds a notorious reputation: Terminal 5. New York has an abundance of great venues. Terminal 5 is not one of them. A converted nightclub, with high ceilings and piss-poor lines of sight doesn’t make a good live music venue. I ventured to Terminal 5 with a degree of trepidation (and, it’s fair to say, a belly full of beer – a state in which it seems appropriate to see an Elbow concert). I wanted a ‘classic’ Elbow performance, and, that’s what I got. It wasn’t just that the material had gained familiarity through a few months worth of listening. It wasn’t just that the smaller venue suited the intimacy of a chatty Guy Garvey in full northern flow (if Terminal 5 is ever described as intimate, you can slap whoever said it from me – and seeing the televised performance that Elbow threw down at Glastonbury confirmed that ‘intimate’ and ‘massive venues’ are not mutually exclusive…). I think that Elbow had got their arms around ‘Build A Rocket Boys!’. They had injected life into the material. They felt it. Seeing Elbow on stage in New York City reminded me of what a special band they were. I swear, it was one of the best performances I’ve seen from them. Terminal 5 was still shit, mind.

The New York audience was clearly very familiar with Elbow. One week later, across on the other side of the continent, and it was a different situation, entirely. At a free festival in San Francisco, Elbow walked onto the stage as an MC who had patently never heard of them announced their arrival. An hour later, and the MC was shocked at what he’d just witnessed. He was visibly moved. As Elbow tore into ‘The Birds’, people sat up and took notice. They played to a few thousand people, and utterly nailed it. It was a trimmed-down festival set, but it was superb. The crowd was won over by the passionate, hearts-on-sleeves performance. Over the space of a summer, the slight ‘Lippy Kids’ had become anthemic – its arms reaching around a San Francisco audience and exploding into a joyous celebration of youth. It was a powerful moment. People who had no idea who the fat northerner on stage was were totally bowled over. By set closer ‘One Day Like This’, San Francisco knew Elbow.

There you have it. My three encounters with Elbow during 2011. As ‘Build A Rocket Boys!’ matured, and came to sound like an album that we’d had for years, so the band rediscovered their intimacy – even at gigs on a grand scale. Again – I point to Glastonbury as a case in point (and, if you haven’t seen the set, you have a duty to watch the clip below).

There’s a recurring theme running through Elbow’s material – not just ‘Manchester’, but something more universal. ‘Coming home’. It’s perhaps fitting therefore, that I write this post on the morning after a triumphant – staggering – Elbow homecoming. And so, last night, Elbow played Manchester Cathedral. This was the special performance which we wanted from Elbow as they return to the city that they love. Thanks to the internet, I (along with thousands of others) felt like I was there. As a band from ’round here’ played the Cathedral in their home town, so Mancunians marked it as a special night. Songs filled with life – marking both the upbeat and the tragic – all shot through with the kind of spirit that only a special band can achieve. This was the homecoming that suits Elbow. It was a celebration. Last night, Manchester absolutely ruled. And, regardless of where you were, if you watched the gig, you were a part of it. Intimacy: restored.

Now, I mean this: during the week in between seeing Elbow play New York and San Francisco, another band form the UK played in NYC. A band for which tickets were as rare as rocking-horse shit. A band that I missed seeing. A band whose performance was hyped. I joined the clamour for tickets, but I am fine with the fact that I failed to get in. That band is Radiohead.

I’m fine, because during that same week, I had already seen the best that the UK has to offer right now. I’d seen Elbow.

One reply on “Elbow: Restoring the intimacy”

Just watched the whole clip – warmed my heart that did.