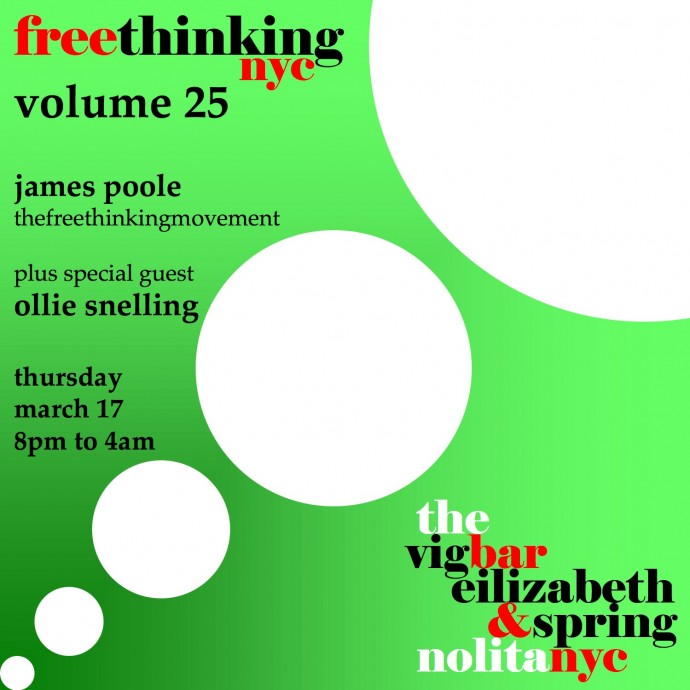 It’s St. Patrick’s Day – so expect a big night in NYC. For freethinking nyc, volume 25 – expect a night of funk. A night of soul. A night of rock. A night where any and every style of music will come at you – as long as it’s got a certain something. It’s not about being cool. It’s not about playing the same music you’ll hear from top 40 DJs all over the city. It’s about bringing the real stuff. New music bumping up against lost classics.

Stepping up to the freethinking plate, and joining James Poole for volume 25 is NYC-based DJ Ollie Snelling. With a background that includes sets at NYC’s Bar 13, Meatpacking District mainstay 675 Bar, and Hive in London, Ollie will be bringing a house-tinged disco flavour to the proceedings. Keeping it fresh.

Nice One Jamie, some great stuff on your play list.
I didn’t know that album had such an effect on you.
If you haven’t already picked up on Richard Earnshaw’s brilliant “In Time” album, check it out either

[…] freethinking nyc, volume 25 » thefreethinkingmovementMar 9, 2011 … Stepping up to the freethinking plate, and joining James Poole for volume 25 is NYC-based DJ Ollie Snelling. With a background that includes … […]