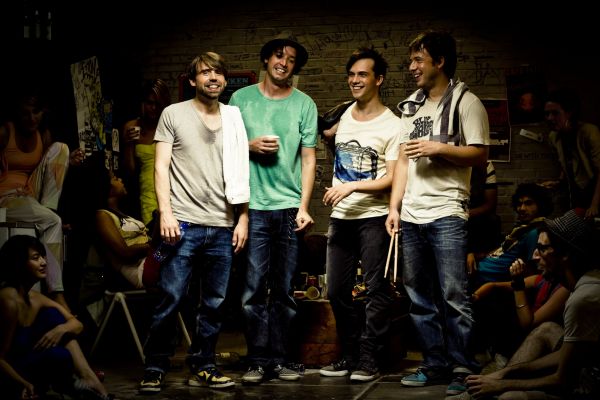 We over here at the freethinking movement LOVE when people suggest music to us. That’s what this movement is all about, opening your mind (or how about freeing your mind and your ass will follow?). Lower East side staple and historian Peter Pabon had this posted on his Facebook page after a night of freethinking nyc. I immediately went out and sought after it. I knew nothing of the band, and finding a track like this (which is five years old!) is like finding a diamond in the rough. C-Mon and Kypski are a Dutch four piece that make Hip Hop music. With Jori Collignon on Keys, Thomas Elbers on Drums/Scratches, Daniel Rose on Guitars and Simon Akkermans, Samples/Beats. Originally just a duo formed in 2003 (Ackerman and Elbers) expanded into a four piece and have shown no signs of stopping according to their touring schedule, and planned takeover of Europe first, then the world. Described as ” DJ Shadow, Beck, Gogol Bordello, Fela Kuti, Super Furry Animals, and Justice crammed into a similarly sized van and left to collaborate”, I believe that that is an accurate portrayal of this band. How could I have missed such a great band? Is this the Wipers post all over again? I’m hoping not, but delighted that I was introduced to C-Mon and Kypski. So sit back on this Monday morning (or afternoon for you UK folks), and check out another band I need a late pass for. Get your shitty bum in gear and out on the dance floor with this littly ditty. Cheers-