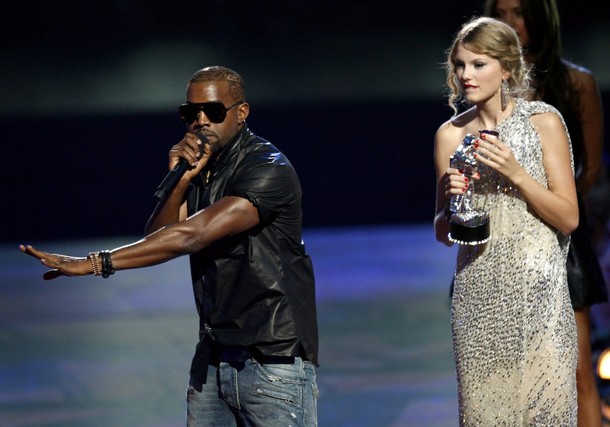 Last night I watched the VMA’s. I haven’t sat down to watch one of these award shows through in a long time. In 30 years, the show, MTV and music have come a long way, or have they? I want the 2 and 1/2 hours of my life back, and something that erases such shitty music from my mind. The state of music, or shall we say mainstream music today is in trouble. The way that MTV stroke the ego and licks the ass of a no talent like Lady Gaga is unbelievable. Hold on, let me put on an Alexander McQueen dress (Oh my God! He’s dead, that is so cutting edge!), trapse around like I’m Madonna (it’s been done before honey, she’s called Madonna), use newly discharged Armed forces personnel to play on the hearts of America when you win an award (can you even name all the branches of the military?), and now be the so-called champion for Gay rights. It’s all been done before, and just because you belt out your new record title: (Surprise, Surprise: I Was Born This Way). You’re so cutting edge with your meat dress and asking Cher to hold your meat purse. Pass me a plate of I don’t give a rat’s ass about it. How about the Hip Hop category? Eminem wins best Hip Hop video for a song no one even knows or cares about. B.O.B. in the Hip Hop category? How about Hip POP? I’m surprised Lady GaGa wasn’t in the Hip Hop category as there were about 6 videos nominated in EVERY category. Chelsea Handler was an ok host. She referenced the cast of Jersey Shore by saying they’re “the reason MTV doesn’t play your videos” to all the artists in attendance. It’s true, who is watching these videos? N*E*R*D doing a Chevy commercial with Ciera? Chad Hugo is the smartest member of that band, he programs all the beats and keeps his mouth quiet, hardly going on stage as to not be seen. Completely embarrassing situation for a good band that will never do better than it’s first two records (either the electronic or studio, which are great). Taylor Swift seems like a confused country girl in a Rock/ Hip Hop world. She looked like she didn’t belong and that music she was playing was atrocious. Next please. At least Usher and Justin Bieber dance, not just stand there like statues, even though their music may be **catchy, it’s still not cutting it in my book. (**OMG will cause you to go into spasmic convulsion though if listened to too long). Drake seemed like the only guy who was even singing/ rapping, as Swiss Beatz’s wife (Alicia Keyes) finally let him play the piano with the most talented women singing the hook, Mary J. Blije. I still don’t see the appeal of Drake, I might have to go back and relisten to his mix tape that got him to where he is. He is supposed to be Hip Hop too, I say more Hip POP than anything. The Rock category was embarrassing as well, Paramore?? 30 Seconds to Mars? Muse seemed like the only real Rock band that deserved to be in that category. I will give kudos, however to Florence and the Machine, but I honestly don’t know what category to put her in, and am not sure that Rock was the right choice. This whole nightmare leads me to the moment that MTV made you wait 2 hours for, an artist that has been hyping himself up since last weekend all over Twitter (since when does MTV care about who has the most tweets during the show, what is that all about?), and completely shot himself in the foot at last year’s awards show: Kanye West.

Kanye deserves a whole new paragraph. Yeezy decided last weekend to go on a tirade on Twitter. He claimed it to be raw. He was mad. He was sad. He was upset at his hijacking of Taylor Swift’s shining moment last year. He said people wanted him dead. He said he wrote a song for Taylor. But wait Kanye, I’ma let you finish, but hurry it the fuck up because hot damn, I couldn’t wait til your performance was over. Here’s the setting: Minimalistic. Kanye, and MPC 2000 (oh snap he has a custom gray one), and then a microphone. Oh wait, I like Matthew Barney as an artist so I’m gonna get all Cremaster Cycle on the stage and let three ballerinas do an interpretive dance to my “apology song” to Taylor Swift while I start out playing a hot beat (which was the best part of the song). “This for all the Douchebags! This is for all the Assholes! This is for all the Jerk Offs!”. Then some auto tune singing (surprise surprise), and cut to credits. I like Kanye. He’s a talented guy. He’s no singer though. Please leave that to somebody like let’s say Ellie Goulding remixed by Chiddy Bang. Who? Some young girl remixed, but you’re dissing Kanye West! Too bad. That’s what I think people are missing, real musicians doing real songs, and that’s why I play music like this video below. Stop letting people like MTV force feed you shitty music and look outside the lines a bit to find artists that are good. They are out there, you just have to turn off the TV to find them.

3 replies on “Who is Listening to MTV’s Music Guidance?”

Wow. I guess you didn’t enjoy the show…

[…] This post was mentioned on Twitter by James Poole, DJ Prestige. DJ Prestige said: I rant about VMA's and the state of music: https://thefreethinkingmovement.com/?p=660 […]

I really didn’t…I want that time back and I’ll never get it.