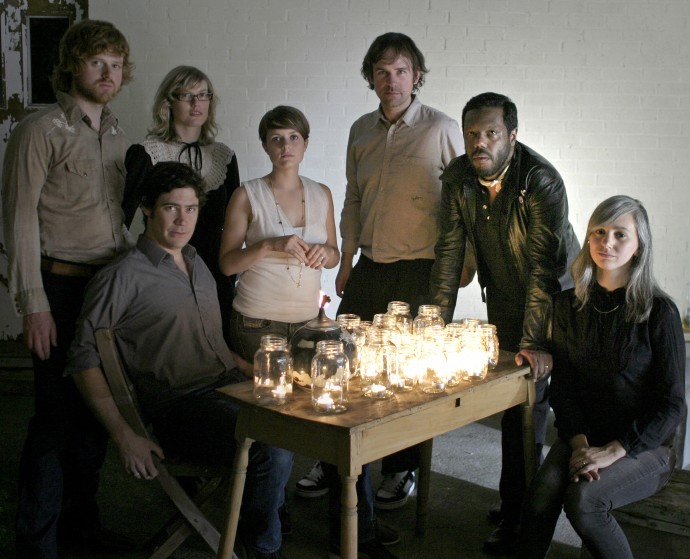 Name a Canadian band. Go on, name one. Chances are, that in the majority of cases, the first band to come to mind is Arcade Fire. In fairness, off the back of a run of outstanding albums, jaw-dropping live shows, and that HTML5 interactive video, Arcade Fire are an example of that rarest of phenomena: a proper band.

Arcade Fire’s latest album, ‘The Suburbs’, is wonderful. Maintaining the level of output at such a high level over three full length albums is worthy of recognition alone – how many bands these days falter at ‘the difficult second album’, or just wither away from any shade of relevance by album number three? Step forward, Editors – actually, that may be a bit harsh, but as a body of work, only their first album was truly worth the widespread recognition. No – Arcade Fire keep it up – they keep pumping with genuinely great, innovative, thoughtful, proper music. And it’s well received.

In the live arena, it’s a similar story. I’ve caught them a few times, and they are at once bonkers and completely in control. They know they’re good, but also emit passion, care, and a genuine desire to entertain. Any band that can rock up to the MEN Arena, an oversize Mancunian venue which seems to still create a relatively ‘cosy’ atmosphere (far superior to Madison Square Garden, for instance), and belt out ‘Still Ill’ deserves some respect. Can you just imagine the guts it must take to come to Manchester, pick out a relatively obscure track by The Smiths, and not just have a stab at it, but to knock the ball out of the park?

I’m guessing that my respect for Arcade Fire is clear. They are great. They are, however, my second favourite Canadian band.

It was a magazine review of ‘No Cities Left’ which put me onto The Dears. Their 2003 album drew the reviewer to make a comparison with Morrissey – at least in the lyrical style of the vocalist, Murray Lightburn. It’s a comparison which I’ve come across many times since – and one which stands up.

Here’s where I struggle with The Dears, and in some ways it’s a continuation of my previous post. They’re just a straight ahead, fairly accessible band. There’s nothing fancy, no strange ‘tic’ which would justify their lack of mainstream success. I’ve seen them perform live a couple of times. Each time, I’ve dragged friends who didn’t know the band along to see them. Each time, said friends have left the venue with a firm thumbs up for The Dears. One of my friends even took to nicknaming their keyboard players as ‘Canadian sex pixies’. I just don’t get why they’re not huge.

And so, here we are – my tip to you. Check The Dears out. You’ll probably still prefer Arcade Fire, and I won’t have the slightest problem with that – but in the very least I may have introduced you to a band that should make it onto your regular playlist.

3 replies on “The other Canadian band”

Funny, but Rush was the first band I thought of.

[…] This post was mentioned on Twitter by DJ Prestige, James Poole. James Poole said: I wrote a blog post about The Dears (and a bit of Arcade Fire): https://thefreethinkingmovement.com/?p=658 […]

Kudos! What a neat way of tinhinkg about it.