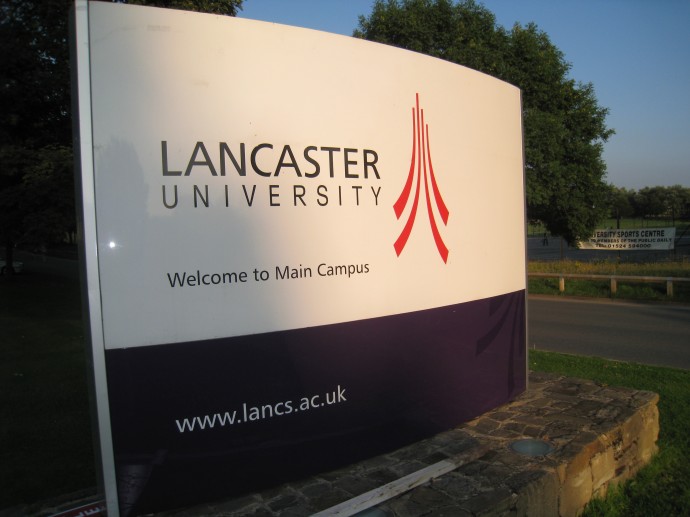 Staggering onto the stage, in front of 1,000 other students experiencing the effects of advanced alcohol consumption, one of my mates came out with a cracking line. One of the best. He was introducing Mancunian dancefloor pioneers 808 State.

For a period in the mid 90s, Lancaster University had an annual set of outdoor end of year concerts. Each college on campus would arrange these events, and to be honest, they became a relatively big deal. I don’t believe that they take place to anywhere near the same level any longer (though, if you know otherwise, please do let me know). Each college would try to out-do the other in terms of the bands playing. During my time at university we saw Brit-pop acts such as Dodgy and soul legends such as Edwin Starr pass through. I was always proud of my college’s achievements, however.

I’ve heard that there’s a story that now goes around Pendle College regarding ‘the time that Oasis were turned down’. Yup. Not our best move. I can’t claim personal credit, but I was certainly involved. My memory of events, though they could be missing some of the details, involved an unknown Oasis asking for £500 more than we had in our budget. As a result, I put forward A Certain Ratio as a suitable backfill. I am forever indebted to my mates, who had the final call, on actually going with this crazy idea. Seeing A Certain Ratio play Pendle College was a university highlight for me.

Getting a ‘proper band’, instead of the usual approach of plumping for a cover act, set the tone for the next few years. After A Certain Ratio in 1994, we managed to get 808 State to head over to the remote campus in 1995. With MC Tunes in tow, they belted out a truly amazing set in front of a packed college audience. The ante continued to be upped, and by my final year – 1997 – a few of us got together to really try to get a good send off for our university days.

Our search for a ‘proper band’ to play the Pendle College Extrav first led us to Snowboy & The Latin Section. I’d seen them a few times before, and was always impressed. Snowboy was not only one of the most talented jazz percussionists I’d ever seen, but his band were able to draw a crowd into a full-on party mood. Playing latin-jazz interpretations of ‘The Flintstones’, ‘Anarchy in the UK’, and ‘The Theme from The New Avengers’ made this easy for a crowd of non-aficionados. Sold. And so, to our headline act.

We’d learned from ‘turning Oasis down’. It’s not the kind of thing you want to do twice. As such, we started to look around for acts that were clearly on the verge of making it big, but not too big. One stood out to me. Olive, formed by ex-Simply Red member Tim Kellett, had seen limited success from the release of their first couple of singles. They were catchy, and most importantly, would absolutely go down in an open-air college setting. Knowing that there was a big push to a remixed version of one of their singles, ‘You’re Not Alone’, we thought that they would be an ideal target. We shot, and we scored. Olive were duly announced as the headline act. People immediately started to complain that they had never heard of them. Those of us that had set us down the path of ‘Olive and Snowboy’ held firm, and told the doubters that we’d be in for a top night. We were, but not quite as we’d anticipated.

Two weeks before the Extrav – with us still waiting for ink on the Olive contract – our predicted success for the band came through. Only on a slightly bigger scale than anticipated. The remixed version of ‘You’re Not Alone’ went straight into the charts at number 1. Balls.

The panic then set in. With no signed contract, and a band that had charted at number 1 actually announced as our headline, we were, to put it politely, up shit creek. My mate Mark had a brainwave which I hope he’s proud of to this day.

Cut back to 1995. 808 State were a top bunch of blokes. They clearly enjoyed playing our college. It was a ridiculously good night. At one point, just before they left, the record decks which were meant to see the DJ through to dawn packed in. The mark of how nice a bunch of blokes 808 State were to us is this: they left their 1210s behind for us. A small gesture, but one which we were blown away by.

Cut back to 1997. My mate Mark picked the phone up to see if 808 State would step in at the 11th hour. It wasn’t even a question. We not only got 808 State, but a second act to accompany them – Espiritu. Oh yes, we were back on track. Our doubters were silenced. We had our night. We had our headliners. We had our supporting bands. We had our mini festival. As a result, we needed an MC. Acknowledging that shyness had never held him back, my mate Glen stepped forward. And then he started to drink.

The night was amazing. Early rain seemed to evaporate as soon as Snowboy kicked proceedings off. The crowd was mesmerised by a band that they had largely never heard of. I was in my element. So was Glen. We continued to drink.

Espiritu (a band that brought out some fine Latin-tinged dance music in the late 90s) took to the stage and played a great set. Since arriving on campus for the show, their lead singer was clearly a stand out feature of their act. She was stunning. And she was French. Glen’s line as they walked off the stage to a rapturous audience should have been an indicator to us for things to come: ‘kind of makes you wish you’d studied French harder, doesn’t it lads?’

And so, to our headline act. I’d seen 808 State play the G-Mex arena in Manchester, and they ‘filled’ it. Their sound was huge, their show was immersive, and their playing was note perfect. This wasn’t an ‘electronic’ band that would simply stand and let their synthesisers do the heavy lifting. This was a group of people that wanted to put on a show. They wanted the crowd to have a good time. They deserved an introduction. Cue Glen:

‘Ladies & Gentlemen. In my left hand I give you Olive’
[audience starts to boo and jeer]
‘In my right hand, I give you 808 State’
[audience goes a bit crazy]
‘Why have the monkey, when you can have the fucking organ grinder’
[audience loses it, and 808 State knock it out of the park]

A random TV feature on 808 State, covering their performance at the Rio Jazz Festival – there’s some live footage in here (not great quality) from around the same time as the Lancaster gigs

5 replies on “Yes, we turned down Oasis”

Your memory of the Oasis events is fairly clear but I think they were asking for way more than our budget could stretch to. In our defence your honour – because I was that soldier (along with Dan) – it was before Supersonic had been released and the sibling rivalry was already in full flow as they had just been arrested for fighting on a ferry. There was a good chance they wouldn’t have turned up even if we had booked them.

But lesson learned, I’ve never turned Oasis down since!

I can also vouch for 808 State as top blokes. They saved our event that night by leaving their decks.

Didn’t we also book Graeme Park for that night in 95? House pioneer!

Darren – thanks for owning up. I didn’t want to shop you and Dan. Seriously – I was told by someone that graduated from Pendle about 4 years ago that the Oasis story had passed into urban legend territory. He was shocked when I told him that it was true.

brilliant. The memories came flooding back. I loved Pendle extravs as they were always a little different back then. This was an awesome night! I for one am delighted that OASIS didn’t darken the event with their over-rated tosh.

That French woman was gorgeous wasn’t she?

South Coast’s talent for le mot juste was (and I assume is) quite something. To this day, when I hear the name Michael Jackson, I think “playful punches”. There are also some cracking pictures of him and me DJing a 70s night at the Sugar House in bad Ryans (Ryan Giggs = wigs). He looks like the son of Jimmy Savile, while I look like Statto moonlighting as a rapist. Happy days.

Saw Oasis At The Wheatsheaf in Stoke in the early – mid 90’s. They weren’t anything special in fact they played to around 100 people most of which myself included left around half way through the set.
Obviously they must’ve improved ( although I’ve never been a fan) but at that time you weren’t missing anything.