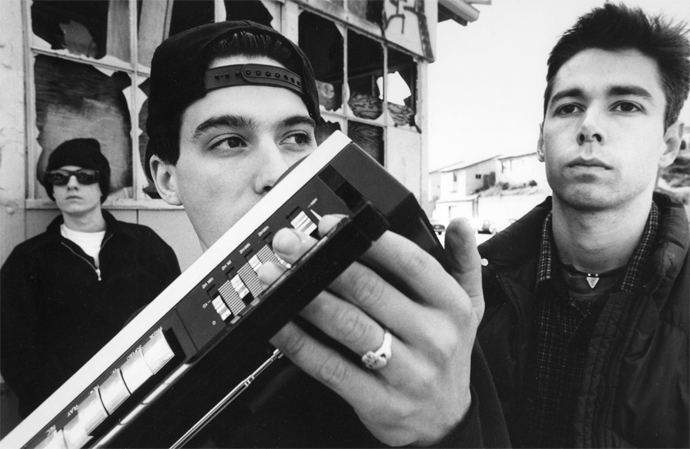 I’ve always rode pretty hard for the Beastie Boys. I remember going to this South Jersey Mall as a teenager and picking up the Cookie Puss 12″ (which I still have today) and then going absolutely nuts when License to Ill came out. In fact, I wore the cassette out in my first car stereo. That record, unfortunately was a frat boys dream, and me being a 17 year old I fell right into that trap. The songs were catchy, and why wouldn’t a teenager get excited about drinking beer, chasing girls, wearing Adidas, and causing mayhem? Plus they were on tour with Run DMC and Madonna for feck’s sake, they couldn’t be that bad!

Then came Paul’s Boutique. I had the colored cassette, and then since I was a fan, bought the CD. Here is the part where I admit something I have never admitted before: I almost traded it in. I’ve never let that one out. I can vividly remember giving it a listen, not being so excited about it, and just tossing it aside. Back then I bought a mixture of media, and when I got the CD, I can remember putting it in a pile to take to Vintage Vinyl or the Barracks Trading Post to trade in. You know what? I didn’t. Something told me to really give this record a chance, that a sophomore jinx was not the case. Even though they didn’t tour, got hardly any push from Capitol Records, had next to no radio play, I had to get back into it. It was the Beastie Boys. Let me make this clear: I am glad I gave this record a chance, in fact, it’s one of my favorite records ever.

In fact, Paul’s Boutique is a masterpiece. The production and sampling of the Dust Brothers (at a time when sampling laws were almost non-existent) to me, went way beyond Prince Paul’s production on De La Soul’s 3 Feet High and Rising, another great Hip Hop record in it’s own right. From the Beatles to Wild Sugar to Sweet to James Brown to Hendrix to Joni Mitchell to Deep Purple to Rose Royce, this is a sampling lesson that Double Dee and Steinski would have been proud of. I spent many a stoned out college night with oil can headphones on trying to find what sample was what. Let me say that again, many. The Beasties were smart too (partly because they didn’t want to get sued), they didn’t give you a sample list, just lyrics and a great gate fold double Lp that kept you wondering about the Wild West that was the Lower East Side of Manhattan of the 80’s. A proper lesson in sampling records. There has not been, and there will never be another record like this ever made. No way any band can get away with a major label release like this. There is a 33 1/3 book out about the making of this record, that if it interests you, I’d highly recommend you read. In addition, there is a sampling source of every record and reference made on this album, you can find that here.

So yeah, I almost traded in Paul’s Boutique, I admit that. I was 19, naive about music, and if I had done that it would have been the worst thing musically I could have ever done. I play the Beastie Boys every gig I play, and I may lean heavy on this record. They have introduced me, through their music, to lots of stuff, from Jazz to Funk to Soul to Hip Hop. In a way, this band has shaped the way I look at music, fashion, and culture. I’m ok with that. I’m sure there is someone from the generation before me that said: “I almost traded in Led Zeppelin IV……….