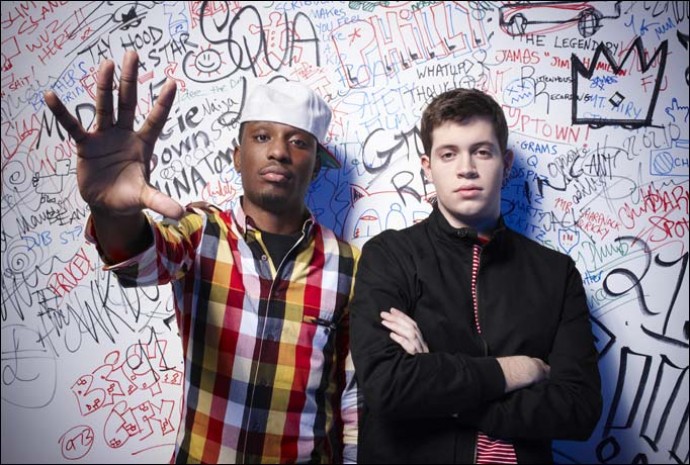 On Monday I waxed poetic about the VMA’s. I wasn’t happy about them, but I was happy about the song I put up by Ellie Goulding. In fact, I was even happier about the guys that did the remix, Chiddy Bang. Hailing from the City of Brotherly Love, Philadelphia, PA, these two 19 year olds have been on a wild ride in the music biz. From a blog to free mix tapes to college shows these guys have done it grassroots, and you know what? It worked. Sampling bands like MGMT (what?), Radiohead (Dan Le Sac vs. Scroobius Pip did it first, but fair enough), and teen pleasers Passion Pit, these two quickly gained notoriety in the UK. Go figure. The UK embraces good music and is ahead of the curve WAY before we are here in the States. Ever hear of Hockey? (prolly not, but they’re American, from Portland, and huge in the UK). Chiddy has the swag and flow of Pharrell, and as time goes on, will get even better. The great choice of beats (popular indie rock band samples) works out well in the end for them. Sounds like it is easy, but really, I applaud them for going this route. Not only do people like their rhymes, their doing their best Girl Talk impression by doing it over some current, relevant, popular stuff. I have no idea how they will get around the sampling thing, but at this point, they have momentum, air play in Europe, and will let the record companies sort them out.

These guys are a breath of fresh air in an otherwise stale environment of new Hip Hop. While guys like B.O.B. are claiming to be Hip (p)op, Chiddy Bang brings the goods on the real. They are most definitely up there with a guy like Lupe Fiasco on the freshness scale. A whole gang of remixes under their belt: Ellie Goulding, Bob Marley, Kid Cuti, Gorillaz, and more, it looks like Chiddy Bang are here to stay. Once again, this cross section of youth are right on point. It’s about the music, not the cars, the ho’s, the ice, the drugs, and auto tune. These guys can actually rap. Neptunes’ proteges? Saviors of today’s declining Hip Hop scene? UK stars? Borrowers of today’s hottest indie hits? Guilty on all charges. Thankfully. Let’s hope Chiddy Bang keep the ball moving and when their official full length is released in October they take over this side of the world. Freethinkers? I think so.

Check out their proper use of the MGMT sample from “Kids”, also used in Xaphoon Jones Remix of Bob Marley as well.

One reply on “I Once Was A Kid”

[…] This post was mentioned on Twitter by James Poole, DJ Prestige. DJ Prestige said: How about some Chiddy Bang to start your day over at the freethinking movement? https://thefreethinkingmovement.com/?p=705 […]