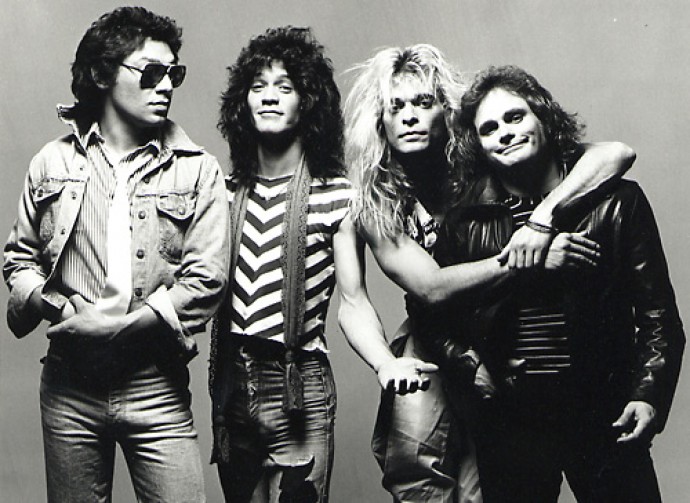 I discovered Van Halen when I was about 10 years old. I heard them covering the Kinks (“You Really Got Me”) and I was hooked. I made my mother play the local Classic Rock Radio station on eleven whenever they came on. At 13, by chance, I was watching a news program that highlighted a marathon up the steps at the Empire State Building. I boldly boasted that I could do the same marathon to my parents. My father, who immediately dismissed me with this statement, gave me the drive to get it done. I couldn’t just do it, I told him (believe me, I had a plan). You see, Van Halen were coming to the Spectrum (R.I.P one of the best venues ever), where the Philadelphia Flyers and Sixers played, in a few weeks. My best friend as a kid had asked me to go. I mean, who wouldn’t want to see Van Halen perform all the hits before their now HUGE record 1984, as well as all the hits from it? I proposed I’d do the marathon equivalent in the staircase in our house, and if I did it in the time the others had, I could go see Van Halen. I’m sure my father agreed because he thought I couldn’t do it. Well, I did, much to his chagrin, and my mother assured that the situation could only go one way: I was going to see Van Halen. My first concert with my mate and his Mom’s friend. Eighteenth row. Some crazy Russian Metal band called Autograph opening up. The envy of all my friends, and the best concert shirt I wish I still had.

The screaming vocals and karate moves of David Lee Roth. The most incredible guitar playing since Jimi Hendrix out of Eddie Van Halen. The drumming of Alex Van Halen, and at one point, Michael Anthony climbing up to the lighting rig and throwing his bass from 40 feet up, and when it hit the stage, my rib cage vibrated. These are things you do not forget. I’ve always held early Van Halen, up to the 5150 record near and dear to me. I wasn’t a huge Sammy Hagar fan, and thought DLR set a bar high enough that no one could ever touch it. Although they are really getting to be geriatric rockers these days (even with reuniting with David Lee Roth), I can assure you the differences they put aside from the past to do a tour were motivated by the money, not their original, “just to play” as they did in the mid to late 70’s. That aside, you still can not deny that Van Halen have left a mark in music. It was good to hear them reuniting, even for just one tour.

I remember hearing a live set from DJ Z-Trip. He started off the set with the beginning of “Runnin’ with the Devil” off of VH I. Just before the vocals he delayed the guitars and let it ring out, staring off his set with such fervor that the crowd got into a frenzy before he dropped one record. I found it brilliant. Fast forward to 2010. A near perfect Van Halen symbol appears on the wall of one of my local DJ residencies. I tease with some VH for a few weeks, scratching in some vocals here, a guitar here, until it is standing room only. I proceed to throw in “Dance the Night Away” from Van Halen II from 1979. These are early 20’s kids, more comfortable dancing to Bloc Party and MGMT than something from 1979. Not after this night. The cowbell, the groove, and the chorus could not be stopped. Much dancing and singing ensued. Van Halen is still a fixture on my nights, as a little bit of Rock never hurt anyone, neither did dancing the night away.

One reply on “Dance the Night Away”

Damn, forgot how cool that tune is. I saw the Hagar version of “Halen,” as we kids used to call them, on the 5150 tour circa 86. Probably not a s cool as the original line-up, but still goes down as the LOUDEST concert I’ve ever seen, hands down! Gonna pull out some Halen records right now!!