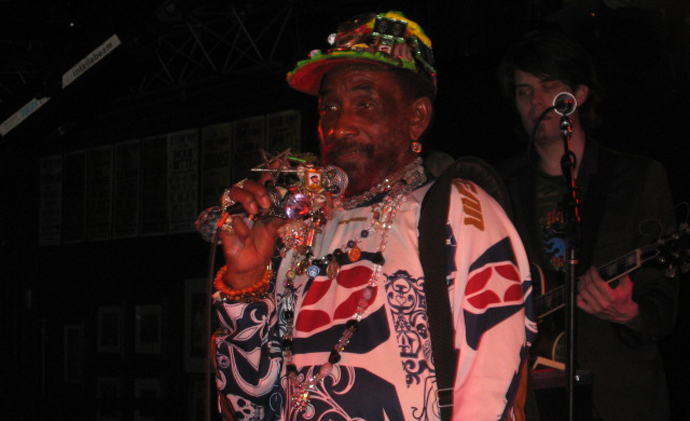 I am a Reggae music fan. I just got back from Jamaica, so I am on more of a Reggae kick than usual (not that that is a bad thing). I’ve been collecting Reggae records for as long as I can remember. One of my DJ buddies/ roommates used to have a huge crate of real Reggae when we lived together (Dub, Roots, Dancehall, Rocksteady) and consequently turned me on to a bands I’d never checked out. One of these artists was Rainford Hugh Perry, aka Lee “Scratch” Perry aka The Upsetter aka Little, aka King, aka Pipecock Jackxon, aka Super Ape, aka Ringo, aka Wonder Man, and many, many more aliases. Possibly the best Reggae producer to ever come out of Jamaica. From his meager beginnings as a hustler and errand boy to inventing the sound known as the Reggae riddim, to his collaborations with Bob Marley and every other name in Reggae music that meant something (and didn’t mean something), Lee Perry has conquered all. Here is a man who made records without the use of computers, man who took four simple tracks and made them sound like 8 or 16. “”It was only four tracks on the machine, but I was picking up twenty from the extra terrestrial squad.” Definitely a freethinker.

I was fortunate enough to see Lee Perry perform here in Asbury Park a few years ago. He, of course is in his 70’s, but has the agility and voice of a man twenty years younger. At one point during his show he reached out and grabbed my hand. It felt like I was holding the hand of Reggae music, a hand that had invented the genre, rearranged it, burned it down (he burned his own Black Ark Studio down once), and then reinvented it again. He ran through songs, old and new, and did it with such attitude and class that it goes down as being one of the top five live shows I have ever seen. This is a man not afraid to push boundaries and take the Reggae world by the balls, squeeze hard, and make an impression. Here is a little slice of Lee Perry, and a big piece of Respect from me to the Original tastemaker from JA.

2 replies on “Return of the Super Ape”

Came back with records I hope!